Cholula is part of Puebla a city in east-central Mexico, southeast of Mexico City and located at the Valley of Puebla, also known as the Valley of Cuetlaxcoapan, a broad valley surrounded on four sides by the mountains and volcanoes of the Trans-Mexican volcanic belt. Its location 40 kilometres (25 miles) east of the Popocatépetl and Iztaccíhuatl volcanoes, giving the LuvShk residence views of their snow-topped peaks. With the proximity to the Popocatépetl, Puebla and Cholula are exposed to ash and dust that emanates from the Volcano during its active periods. As we were visiting this beautiful area, the Volcano showed signs of smoke, and a week after we departed, there was a significant eruption.

Edward Burnett Tylor
After climbing steep roads and avoiding Mexico City, we made it to this fantastic plateau in the middle of Mexico, passing trucks of all sorts. 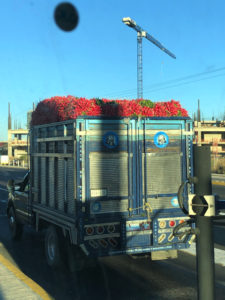 A truck full of radishes

We decided to spend a couple of days here in Cholula, which is considered the oldest city in America to spend the last few days in the year 2019 and ring in 2020 at a fantastic little campground, Trailer Park Las Americas, in the middle of town. The campground had a lookout tower you could climb ( a little sketchy but you live just once I say)and see the city of Cholula and Puebla. Most of the tourist attractions were walking distance away, and we met some likeminded fellow travellers to spend the next few days together. 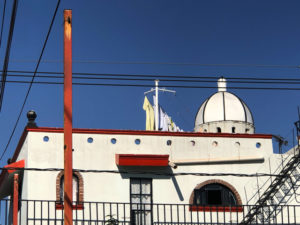 Drying laundry on the rooftop 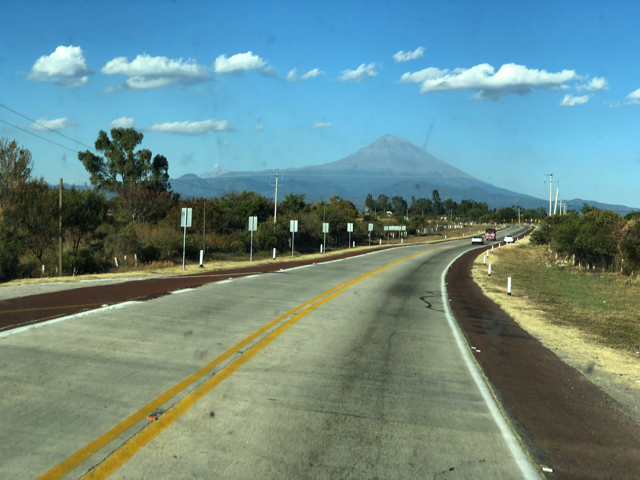 The traveller sees what he sees, the tourist sees what he has come to see.
Gilbert K. Chesterton
The Santuario Nuestra Señora de Los Remedios in Cholula built-in 1594 has in its doorway a simple arch, and it has two identical towers. In its interior, it has a beautiful neoclassical altar, much like the style of the rest of the decor. Today it is a pilgrimage for many people to climb the hill and worship. We have seen older people beeing pushed up  686 steps to the church in their wheelchairs by their grandsons or sons in the hot, hot sun. Once you reach the top the view is spectacular inside and out. 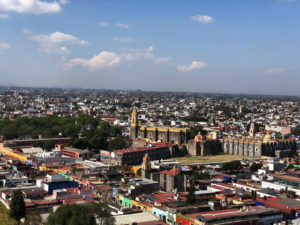 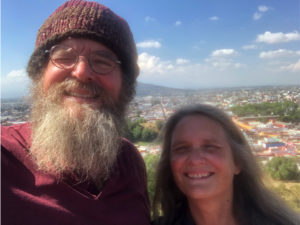 Thanks to the brush and grasses that had overgrown its walls, the largest human-made pyramid in the world has been mistaken for a hill. Originally constructed over 2000 years ago, the Great Pyramid of Tepanapa (often referred to as the Great Pyramid of Cholula) boasts a larger volume than any other ancient, human-made structure, including the Egyptian pyramids.

When the Spanish arrived at Cholula in 1519, Cortes and his men were too occupied with the decimation of the indigenous people and their conspicuous holy sites; they failed to recognize the pyramid as such, instead of thinking it the perfect hill site for one of their countless new churches! Within the year, La Iglesia de Los Remedios was constructed, where it remains to this day. As the dirt began to fall away, the pyramid revealed itself to archeologists, who have excavated the pyramid’s stairways, platforms, altars, and over five miles of tunnels snaking through the structure’s innards.

What a contrast it was to visit both sites. Both are monuments of worship and power over others.

I am not sure how I feel seeing the gold and richness being displayed and worshiped. We have seen many churches and worship monuments on display all around the world and all I can see is blood and sorrow. So with that said I climb this mountain and passing trough the tunnels is not for pilgrimage or worship but more for shame and apology to all who have been hurt and changed for beliefs which have been forced on. This has nothing to do with religion or belief and all to do with conquering someone else. 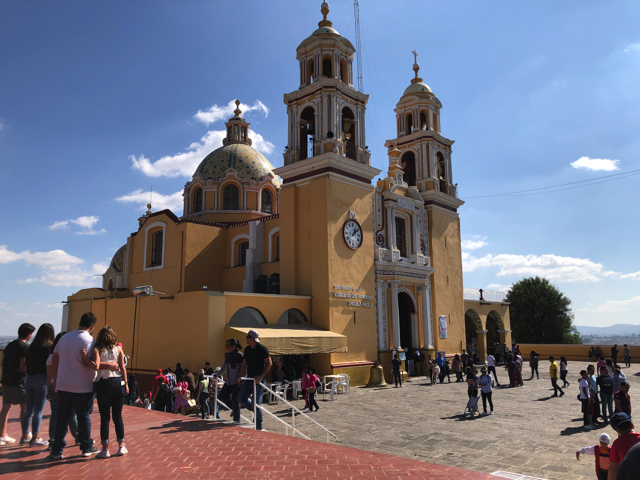 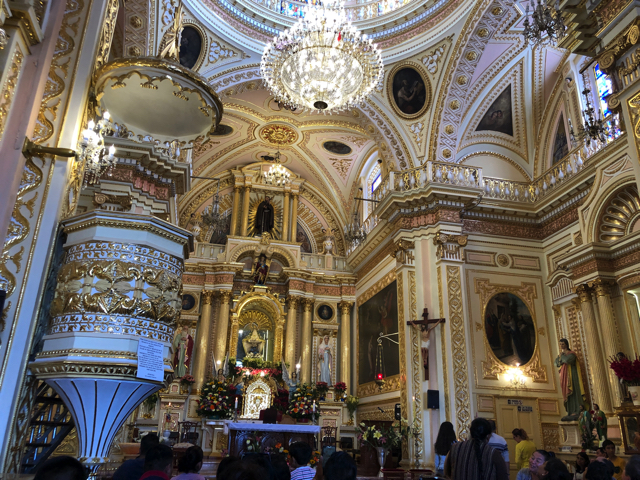 Build right on top of the Great Pyramid. The Spanish conquest of the Maya 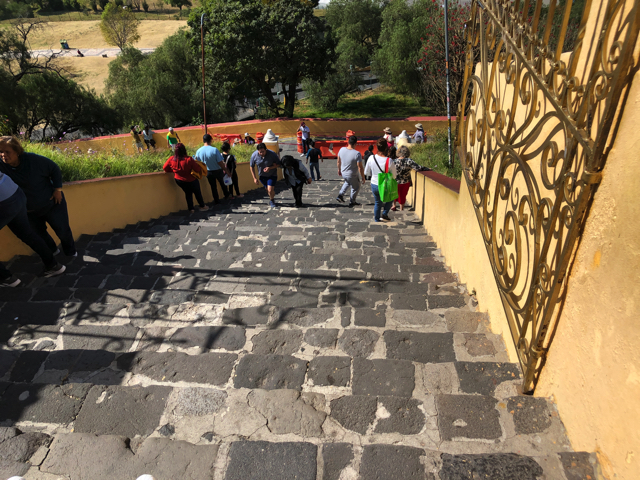 686 steps to climb but well worth it! 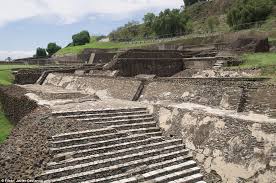 The Great Pyramid of Cholula, also known as Tlachihualtepetl (Nahuatl for “made-by-hand mountain”), is a huge complex located in Cholula, Puebla, Mexico 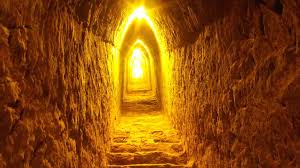 A maze of tunnels to the Great Pyramid

Frogs are smart – they eat what bugs them.

Puebla and Oaxaca. The best-known moles are native to these two states.

Moles come in various flavours and ingredients, with chilli peppers as the common factor. However, the classic mole version is the variety called mole poblano, which is a dark red or brown sauce served over meat. The dish has become a culinary symbol of Mexico’s mestizaje or mixed indigenous and European heritage, both for the types of ingredients it contains and because of the legends surrounding its origin. So, of course, we had to have some of this fantastic stew at its birthplace. I had the original Mole Poblano, and Cliff had the Mole Verde. Mole is my favoured Mexican dish, and it was so good to have it at its place of origin.

We also had to have some Pulque. You can only find this special drink on the street written on a homemade sign saying fresh Pulque. Pulque, or octli, is an alcoholic beverage made from the fermented sap of the maguey plant( similar to an agave plant). It is traditional to central Mexico, where it has been produced for millennia. It has the colour of milk, somewhat viscous consistency and a sour yeast-like taste. It is the Mayan version of the beer. After beer from Europe flooded the market, the production of Pulque just about disappeared as Pulque can not be preserved for an extended period of time. But every so often, you can find a vendor selling you that mysterious and so delicious drink.

As we kept exploring the market, we came across the most curious food yet. Fried Grasshopper. 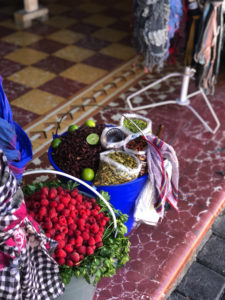 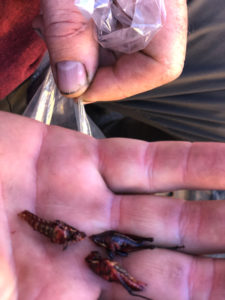 Chapulines are grasshoppers that are commonly eaten in some regions of Mexico.

They are collected only at certain times of year (from their hatching in early May through the late summer/early autumn). They are toasted on a comal (broad flat cookware) with garlic, lime juice and salt containing extract of agave worms, lending a sour-spicy-salty taste to the finished product.

Well, it was like eating chips without thinking that the legs are between your teeth. And once you put your mind over matter it actually tasted really good.  So try it for your self. You will be surprised. 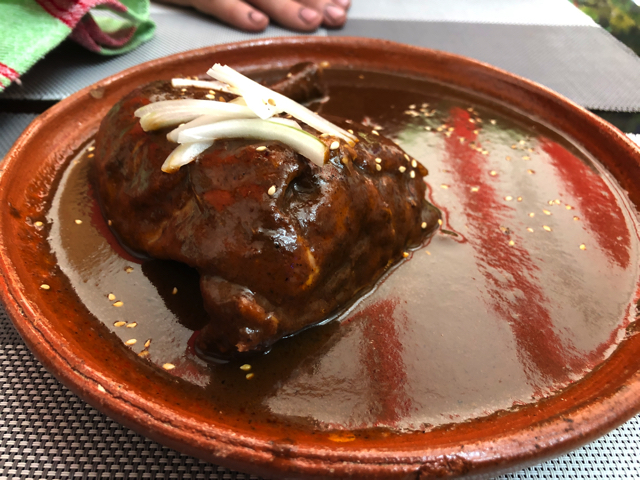 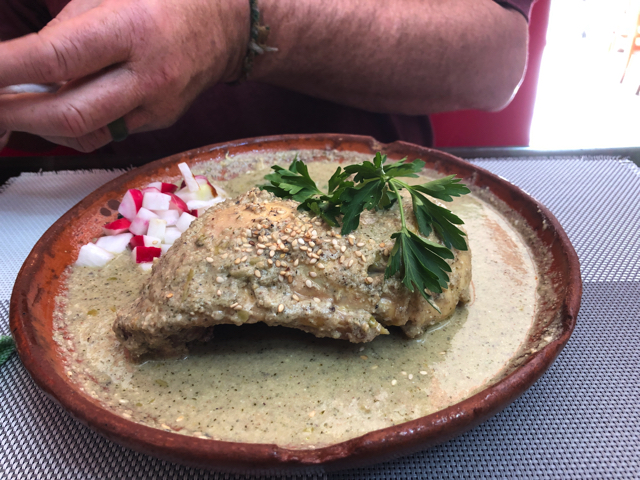 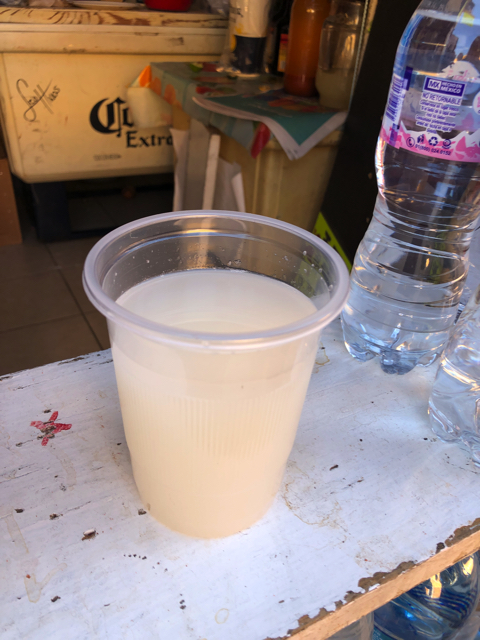 Tomorrow is the first blank page of a 365 page book. Write a good one!
–Brad Paisley

As we stroll through the passageways of the markets and streets, we discovered beautiful streets 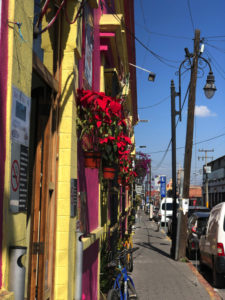 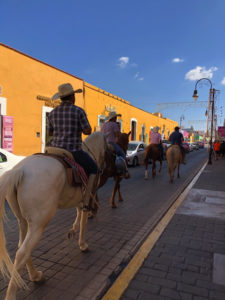 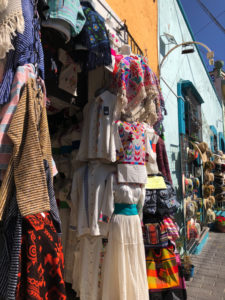 But best of all as the day came to an end we discovered a beautiful place to be and new friends, George and Stefanie, to share the start of a blank page of a new year. Happy 2020! We are so curious to see what you have in store for us. 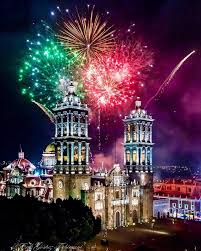 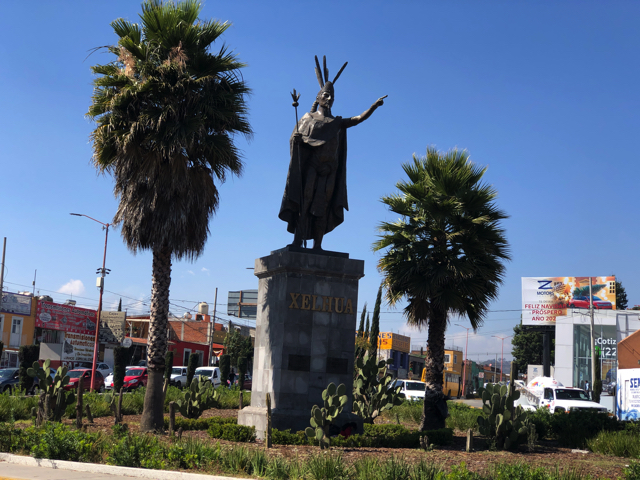 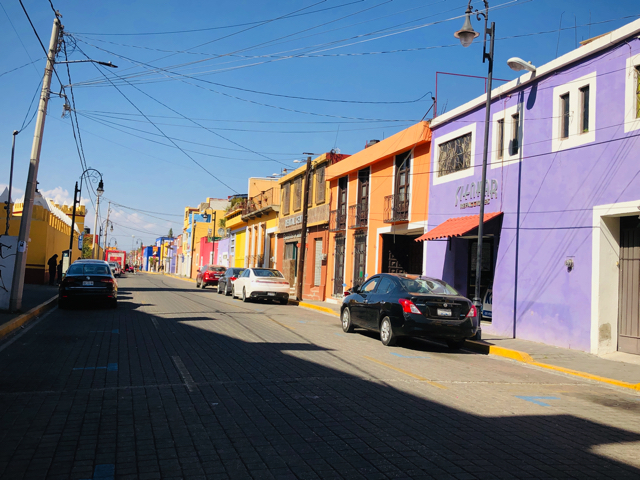 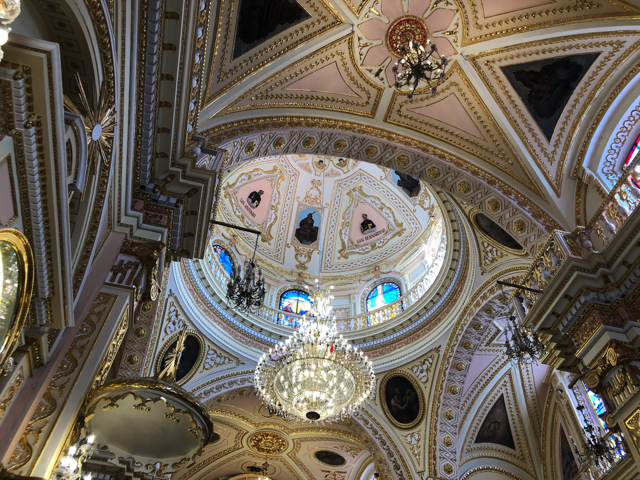