April 02, 2020
With one foot in the Central American jungles and the other in the Caribbean Sea, pint-sized Belize is packed with islands, beautiful landscape and culture.

Belize is the true definition of a melting pot, a land where many different cultures have blended together to form the special laid-back identity of a Belizean. With an open-minded attitude towards interracial unions, several distinct cultures still exist in Belize today, a mix of Creoles, European Mennonites, East Indians, Chinese, Garifuna, Maya, and Mestizo peoples. Despite their very unique origins, today these traditions and cultures have blended together in Belize to create a harmonious society.

I doubt you will ever find a country as diverse as Belize. Our population comprises of people of many cultures all living harmoniously ‘as one.’ We may face challenges on a daily basis, but we always have a friendly smile and warmly welcome everyone to enjoy Belize.

After we successfully crossed the Belizean border in under 2 hours, we headed to Orange Walk 30 miles south of the border. At the Lamanai Riverside Resort located in the centre of the city of Orange Walk and
next to New River, we spend our first night

Parked  by the New River 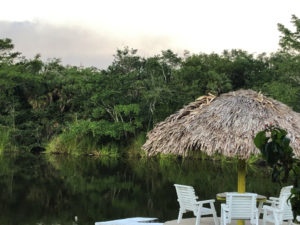 This spot is well known by tourists where you can board a water taxi to bring you to the Lamanai Ruins down the river, 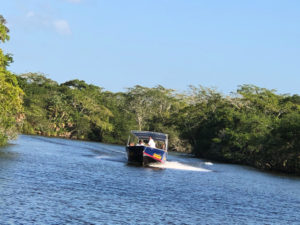 Water taxi picking up tourists at the side of the riverbank

but we opted out on this and enjoyed just the bird watching, crocodiles, iguana and we even saw some manatees swimming in the river. It was a great start to discover the beauty of Belize. 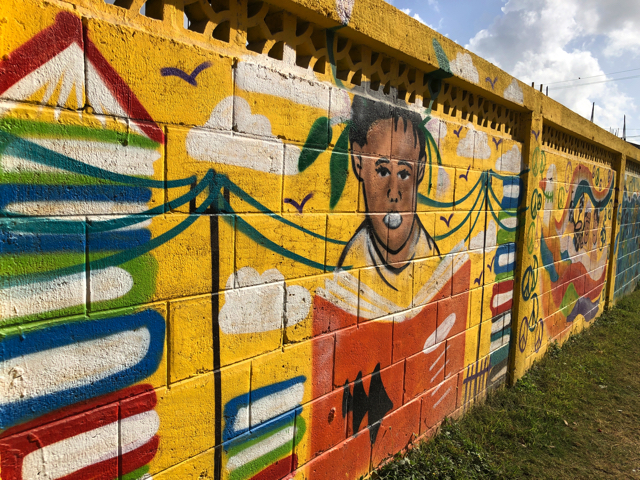 Think about what would happen if Indiana Jones and Google Earth had a love child. I use high-resolution and NASA satellites and look for subtle differences on the surface of the earth that locate buried ancient pyramids and towns and ancient tombs, which we then go and excavate.

Altun Ha means Water of the Rock. It was here at these ruins that the largest carved jade object in the whole Maya area, a Jade Head, was found. This Jade Head represents the Sun God, Kinich Ahau, and can be seen at the museum at this site and in the corner of every Belizean banknote. 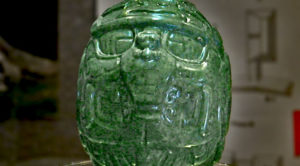 Altun Ha is located just 31 miles north of Belize City on a two-mile-long dirt road that connects the site to the Old Northern Highway and is only six miles away from the Caribbean Sea. It covers an area of about five square miles and was once a major ceremonial and trading center. Once home to as many as 10,000 inhabitants over a 1,000 year-long period of occupation dating back as early as 200BC, it was occupied as recently as the 10th century.

This site allowed us to bring our dogs along, which was a great surprise and made our visit so much more enjoyable. From climbing the pyramids to walking through the jungle, even though the site is relatively small, the details of the excavation were pristine. This site is one of the less-visited pyramids in this area even though the monument and the jade head are a national symbol. 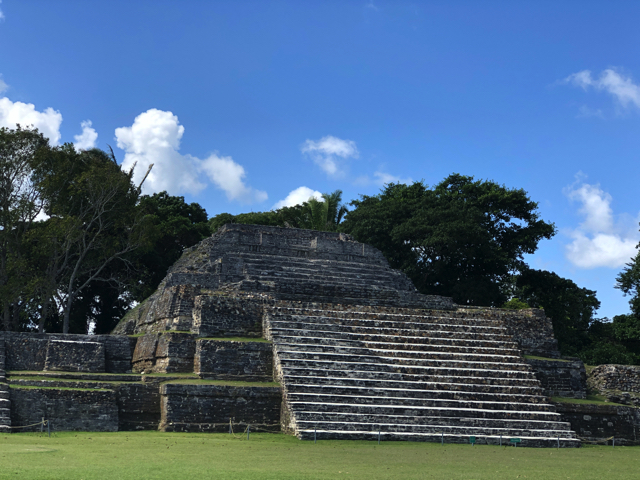 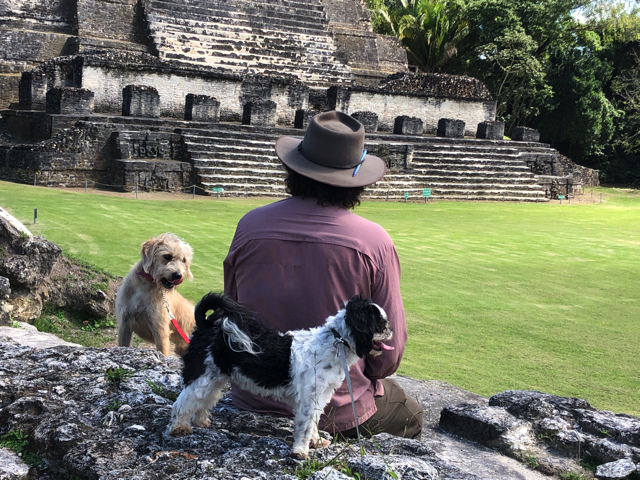 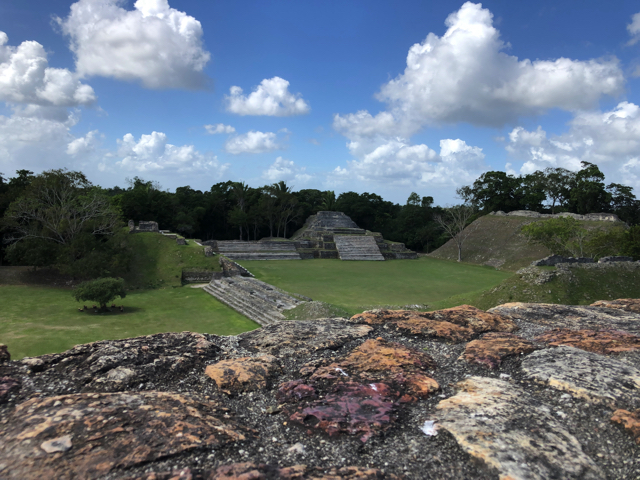 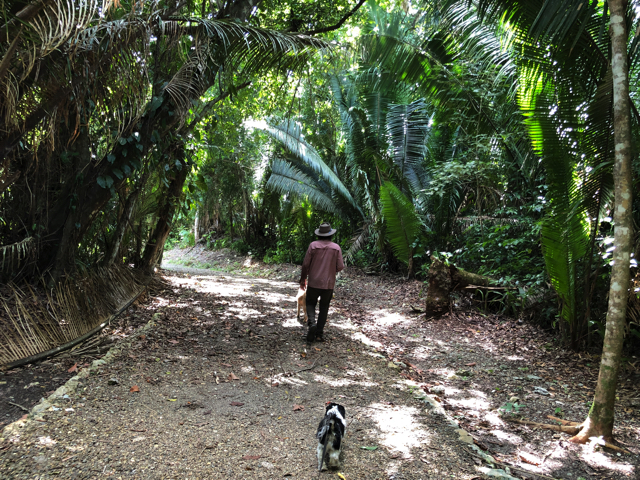 My passion for gardening may strike some as selfish, or merely an act of resignation in the face of overwhelming problems that beset the world. It is neither. I have found that each garden is just what Voltaire proposed in Candide: a microcosm of a just and beautiful society.

Every so often, you stumble on a place you thought you stop for a night, and then you find a little piece of paradise with an owner who shows a passion for teaching you and the world about his small piece of heaven. Chateau de Pradines Camping is located 1 km from Altun Ha. Enrique and Belinda, our amazing hosts, welcomed us into their home and eagerly taught us about organic growing self-sufficient food.
Their whole garden was open for us to pick and eat, and we learned about soil and local fruits and vegetables. In the evening, we had long conversations about the world while we were all eating our harvest of that day. Belize is showing us the people’s generosity and the incredible knowledge of growing food. 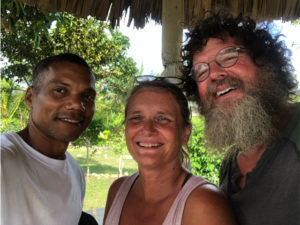 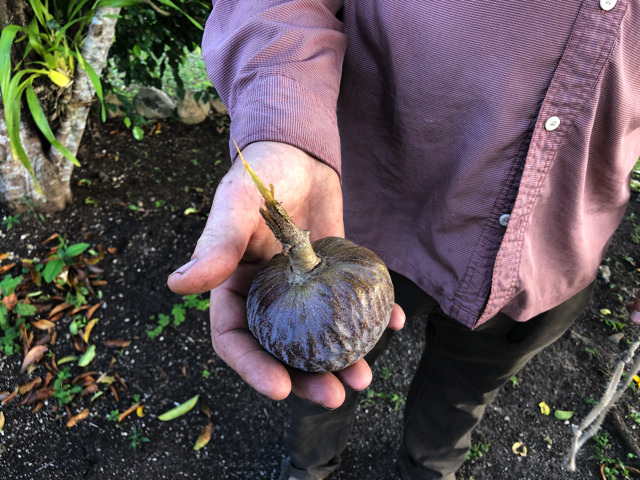 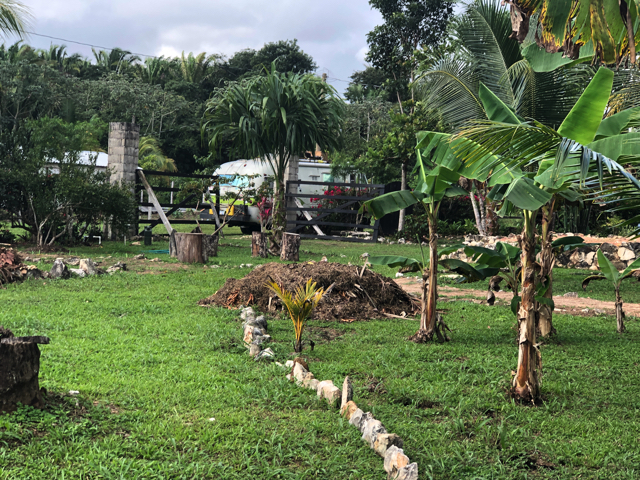 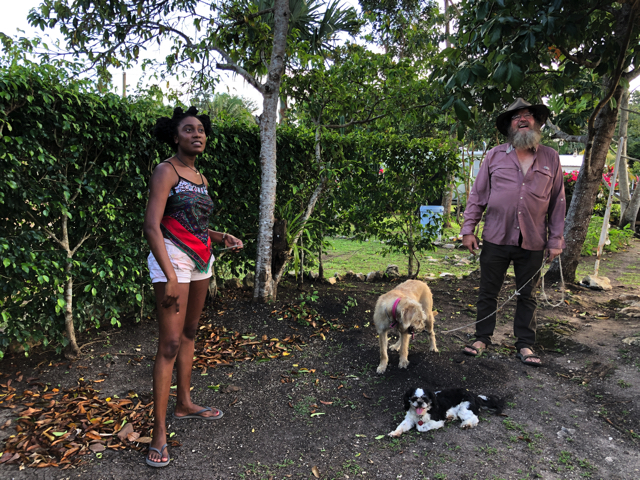