Written in stones a desert adventure

“Mankind are so much the same, in all times and places, that history informs us of nothing new or strange in this particular. Its chief use is only to discover the constant and universal principles of human nature.”
David Hume

Outside of Sedona Arizona, there is a wealth of history to be discovered and one of them is Palatki Heritage site, well worth a visit

The past is history written in stone that can’t be altered. The future is transitory and never guaranteed. Today is the only thing you can alter for certain. Make the most of it.

Palatki, a village built into the red rock, was first documented by Dr. Jessy Walter Fewkes in 1895. He believed that the construction of the Palatki cliffs dwellings began about A.D 1100, and the Sinagua people used that until about A.D 1275. It`s thought that it had an estimated population of 40 to 80 people at one time. About A.D.1150, the climate became warmer and moister, which made the Verde Valley even more conducive to agriculture than in the past, especially in the upland along the Mogollon Rim. Between A.D 1150 and 1300, the Sinagua reached their greatest territorial extent in the Verde Valley, due to local population growth and movement of people from surrounding areas into this area. Small settlements of three to ten families sprouted throughout the Verde Valley. The people built strategic the dwelling under the overhang of the cliff so they would get the shade in the daytime, being protected from the elements, and have a great view over the Verde Valley. Some parts of the cliffs numerous cave paintings over the last thousands of years, which makes this site a fantastic place to visit for history buffs. You have to take a free guided two- hour tour into the site, and the guide has of knowledge. 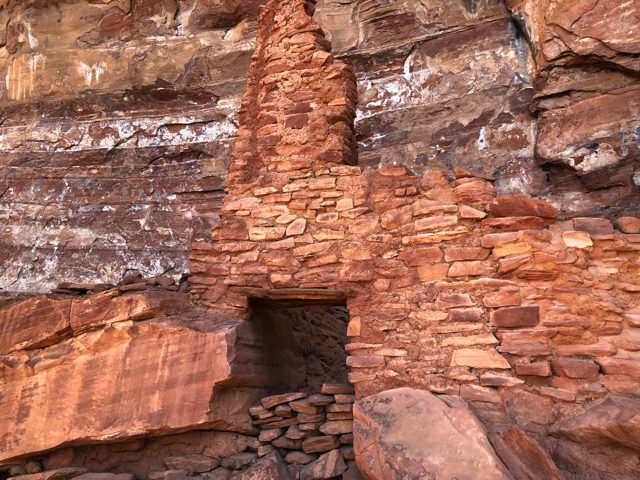 snowbird noun [snoh-burd] Informal. a person who vacations in or moves to a warmer climate during cold weather.

Quartzsite AZ is a popular snowbird destination and Boondock capital of North America. 1.5 million people will visit this small town and the surrounding area for overwintering in the hot desert especially January and February. We have been told the desert turns into a massive RV boondocking park. It is also the burial place of Hi Jolly (Hadji Ali), an Ottoman citizen of Greek-Syrian parentage, who took part in the experimental US Camel Corps as a camel driver. 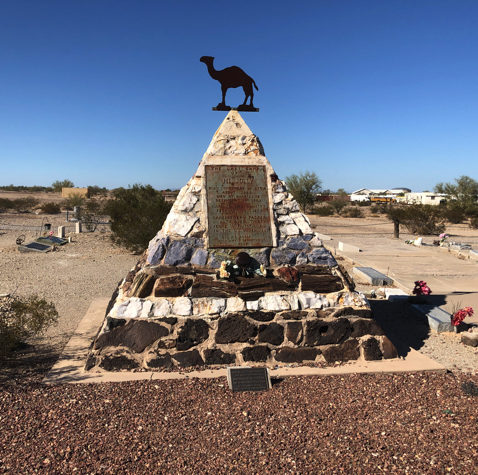 So, of course, we tried our boondocking in this area even though the desert is very quiet and not many people around. We also did some maintenance on The LuvShk 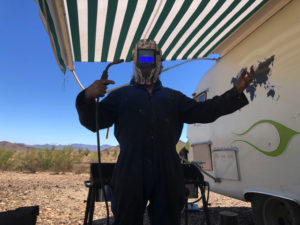 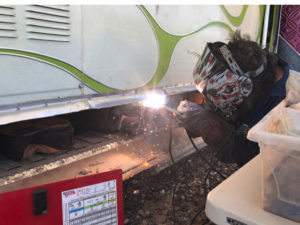 Adding extra bars to lock our outside storage 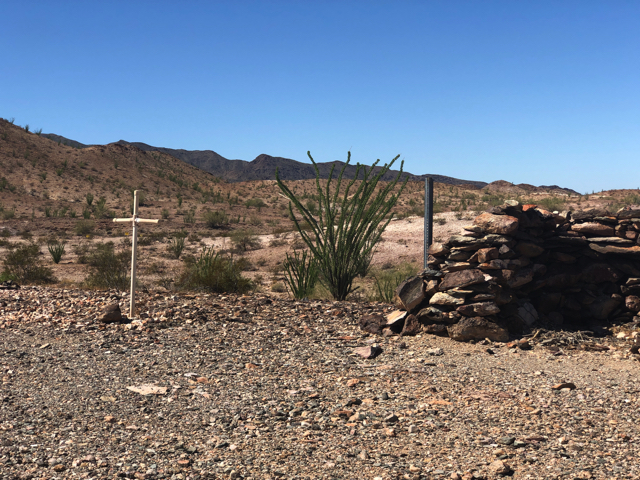 Boondocking in the desert 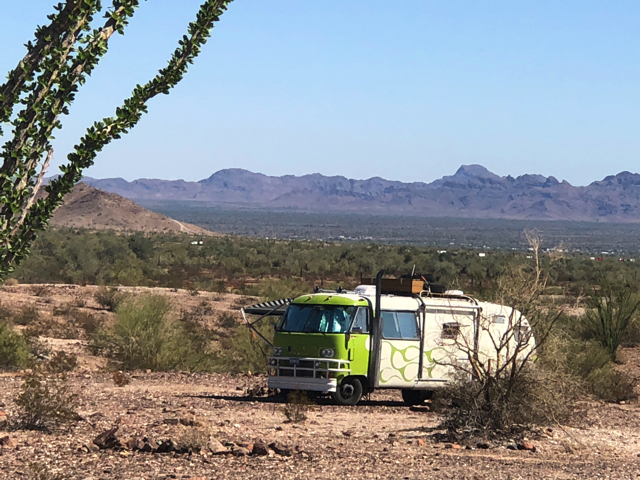 “It’s the Joshua tree’s struggle that gives it its beauty.”

We did this National Park in one day. It is not very pet-friendly but most of the sightseeing you can do by driving. But no hicking with your dog. It is still worth the drive to experience the surrounding landscape. Do bring water and protective clothing as it gets very hot here.

Joshua Tree National Park is a vast protected area in southern California. It’s characterized by rugged rock formations and stark desert landscapes. Named for the region’s twisted, bristled Joshua trees, the park straddles the cactus-dotted Colorado Desert and the Mojave Desert, which is higher and cooler.

The Joshua Tree
Yucca brevifolia is a plant species belonging to the genus Yucca. It is tree-like in habit, which is reflected in its common names: Joshua tree, yucca palm, tree yucca, and palm tree yucca. 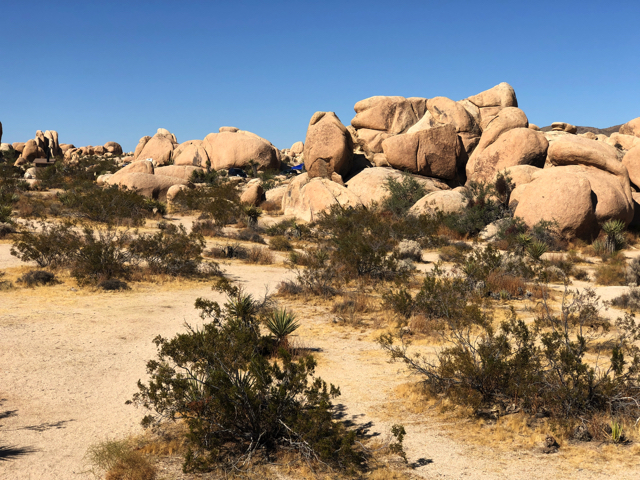 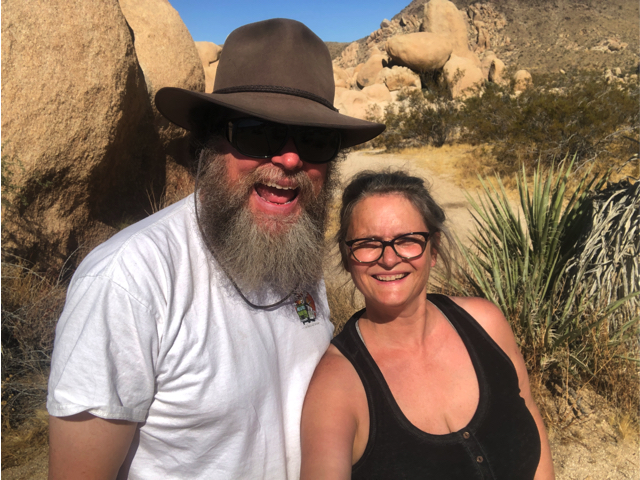 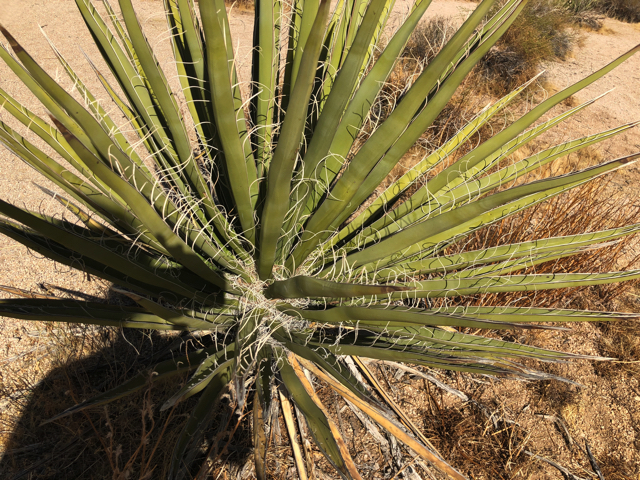