Off the beaten path – an adventure to Caracol, Thousand Feet Falls and Big Rock Falls

The LuvShk travelling on muddy rough roads with incredibly loud monkeys above the tree canapes and a fascinating ancient city tucked away in the middle of the jungle. Welcome to the Caracol ruins in Belize!

Visiting the Caracol ruins was one of our must do in Belize. Caracol is an ancient Maya city located in the Cayo province in Belize, surrounded by the Maya Mountains. The word ‘caracol‘ is Spanish for ‘snail’ – though ‘Oxhuitza‘ was the original Maya name. Getting to Caracol from San Ignacio took us 3 hours on terrible muddy bush roads. Other travellers advised us that even with a 4×4 pick-up, the chances of getting stuck on the way to the ruins were very high, but we gave it a shot anyway. 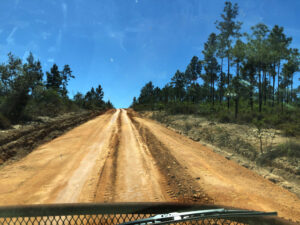 There have been plans to build a proper road leading to Caracol’s jungle. But the road constructions have been going on for a while and are nowhere near being finished. We arrived at the visitor centre around noon. 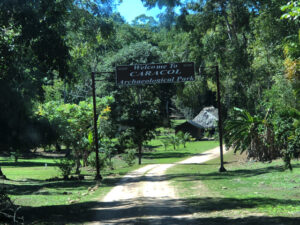 As we purchased our tickets to enter the ruins, we found out the site closes at 1 pm as there are lots of military activities around the ruins. Caracol borders Guatemala, and there have been some issues between the two countries. With another 3 hour drive back, they wanted everyone to get off the roads before dark. The Park host gave us free entry and a quick 1-hour tour.

It was a 10 min hike to reach the majestic twin Ceibas, a sacred tree by the ancient Maya, guarding Caracol’s entrance. 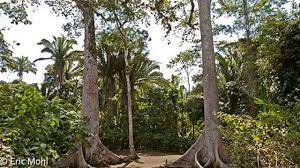 The history of Caracol (or Oxhuitza) is strongly linked to Tikal in Guatemala and Calakmul in Mexico as it is between those two countries.

Continuing to the central part of the site, we suddenly heard strange roaring sounds coming from the trees. The closer we got, the louder the noise—howler monkeys. 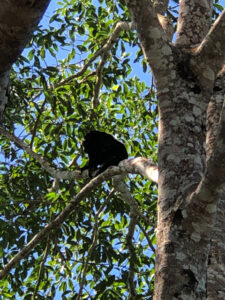 We enjoyed observing some of them scrambling and swinging around in the treetops.

We were still watching the monkeys in the trees while advancing to the central court when the sight of the most significant structure in Belize appeared: the Caana also called ‘the sky palace. 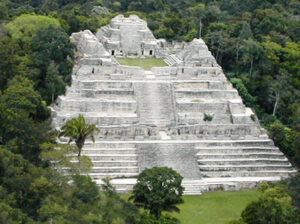 With its 43 m height, it thrones in the city’s center and overlooks the astronomical tower and the surrounding jungle.

It was a long exhausting climb to the top, but the view was Incredible. We could see the magnificent tree canopy over several kilometres in all directions. Also, from here, we spotted toucans and macaws flying around and two heavily armed guards down below—a quick reminder of the fragile peace of mind around us.

The 1-hour tour turned into 2 hours. Then, suddenly, it was time to drive back. Bouncing along the rough roads took longer than expected. 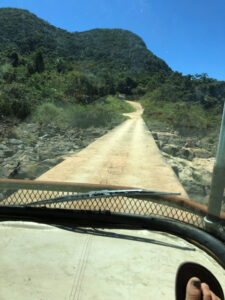 As nightfall came, we still had a long way to go. Finally, at about halfway, we arrived at a military checkpoint. The soldier told us that it was not safe to continue to drive, and he would check with his Commander if we could spend the night at the military camp. 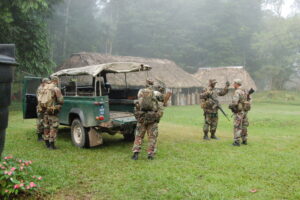 Suddenly there were more Belizean soldiers, and one of them told us that their Commander was in San Ignacio and would not be back until morning. He called his superior and told him we broke down( he winked at us with a smile), and we needed to stay overnight at the camp, which is typically not allowed. He got approval. ” No problem! You guys have to leave before 8 am as my Commander will return right after”. 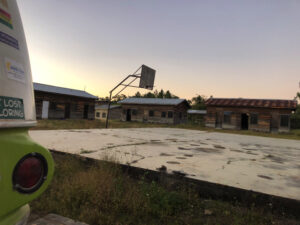 The soldier offered showers and a meal. After dinner, some soldiers played basketball while others played Domino. We had a peaceful and safe sleep in the most unusual place that night.

Some interesting facts we learned: 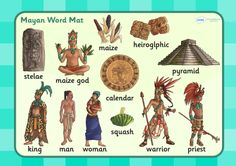 c. 750 Writing is developed in

100 The city of Teotihuacan forms; cultural, religious and trading centre

400 The Maya highlands fall under the domination of Teotihuacan, and the disintegration of Maya culture and language begins in some parts of the highlands

899 Tikal, Caracol and Calakamul are abandoned.

900 The Classic Period of Maya history ends with the collapse of the southern lowland cities.

Only 20% of ruins have been uncovered and researched.

“There is a hidden message in every waterfall. It says, if you are flexible, falling will not hurt you.”

The following morning we got an early start to continue on the bumpy
road back to San Ignacio. As we were bouncing along, we saw a sign, “Thousand Foot Falls,” located in one of Belize’s oldest natural parks, “Mountain Pine Ridge Reserve” in the Cayo District. So we followed the sign onto an even more challenging road and continued 20km. As we made our way through the verdant hillsides, we finally arrived at the entrance and viewing area equipped with a public restroom and benches. 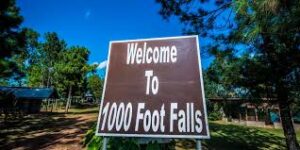 There we were greeted by a caretaker. He guided us to the viewing platform. From there, we could see the majesty of the largest waterfall in all of Central America, the Thousand Foot Falls. Although its waters descend more than 1,600 feet into a thickly forested gorge. It was a majestic sight! We had a 360-degree view, and we could see the great Mountain Ridge Reserve, a protected nature area teeming with wildlife and unique avian species that measure more than 430 square kilometres (106,000 acres) in size. The Caretaker pointed to a rare orange-breasted Falcon. 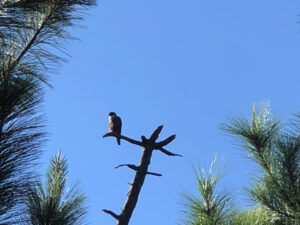 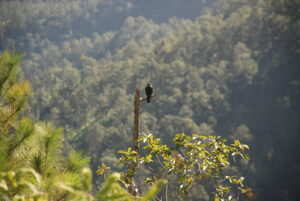 We could see the Falcon flying past us and landing on a nearby tree. After taking some photos, the Caretaker showed us a few of his plants and his garden. 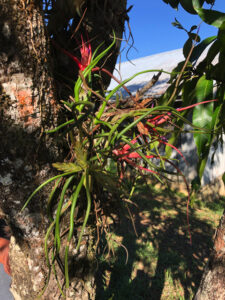 Air plant growing on a tree 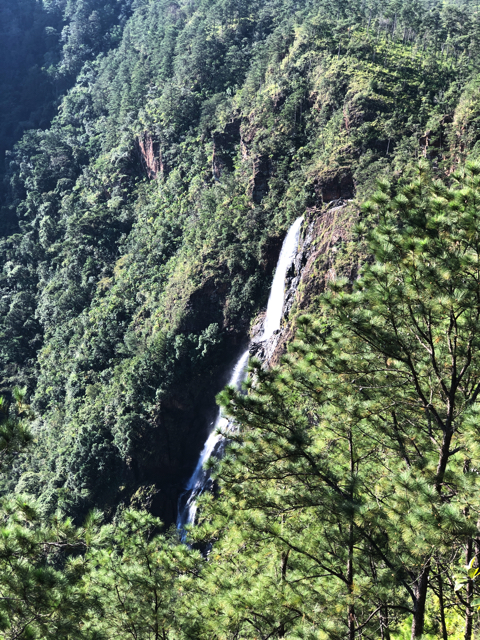 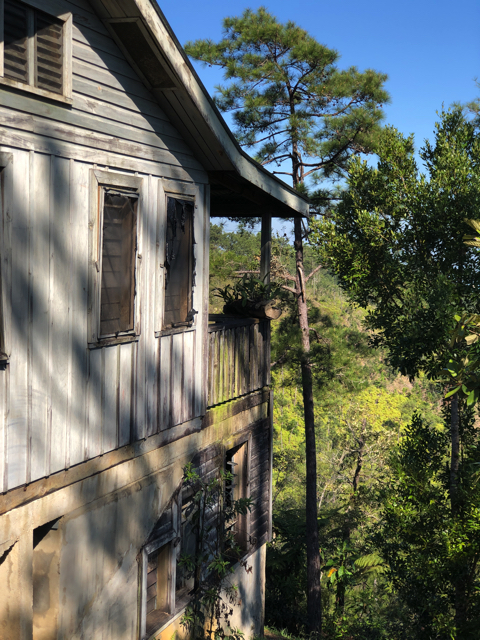 We were the only visitors here, so there was lots of time to tour around. Later we invited the caretaker to have coffee and breakfast with us on theLuvShk, and he gladly accepted. We had a fantastic morning surrounded by nature. 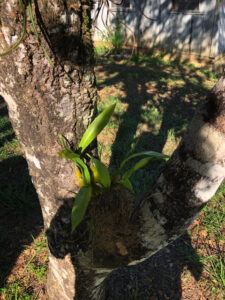 Black Orchid growing on a tree

“There’s no better place to find yourself then sitting by a waterfall and listening to it’s music.” – Roland R Kemler

As we continued our drive back to San Ignacio, we did one more stop at the Mountain Pine Ridge Reserve. Big Rock Falls is an impressive 60-foot waterfall with two large, deep emerald pools filled with spring water, perfect for swimming or cliff jumping. The water from the peaks of the Maya Mountains rushes over giant granite rock, erupting down the waterfall. The footpath to the falls is a 15-minute hike; some of it involves climbing down roughly hand-made stairs to the valley below. Once we reached the water, we followed the large slabs of not-so-flat and slippery granite to reach the falls. Finally, it was time to jump into the refreshing and surprisingly cold water, and it was a great way to cool down from the tropical heat. In addition, it was a fantastic way to end our two-day adventure with a great swim surrounded by a beautiful setting. 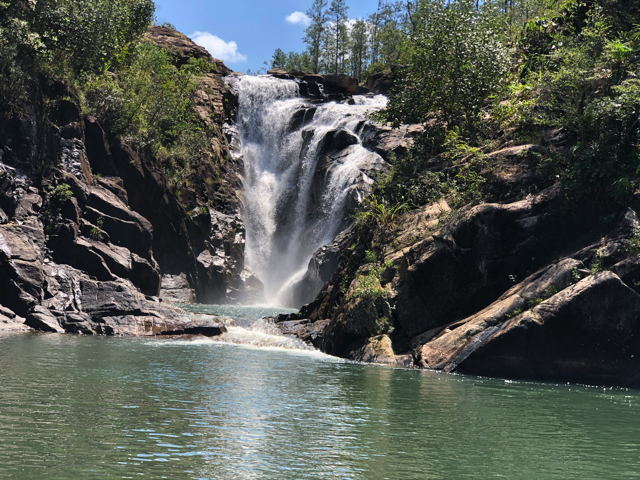 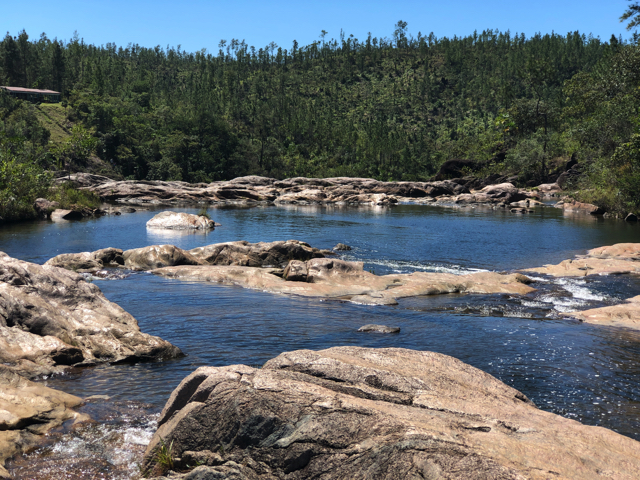 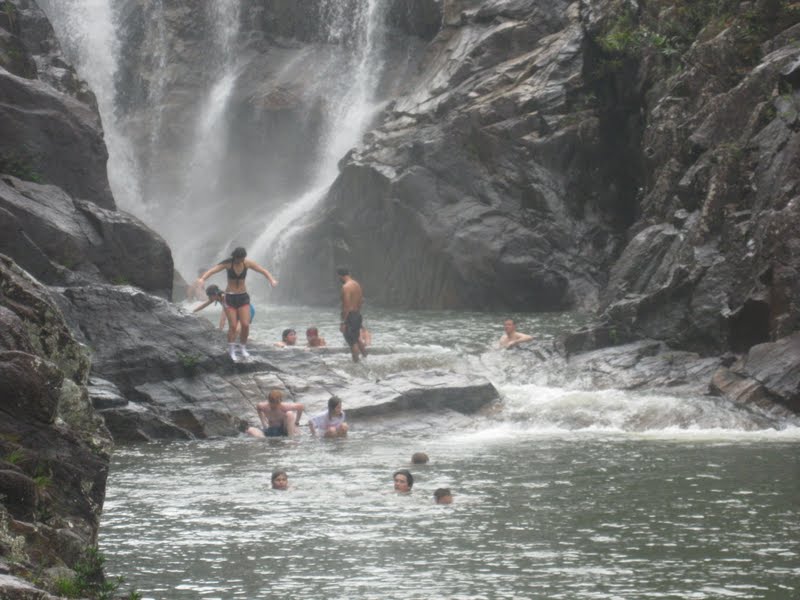 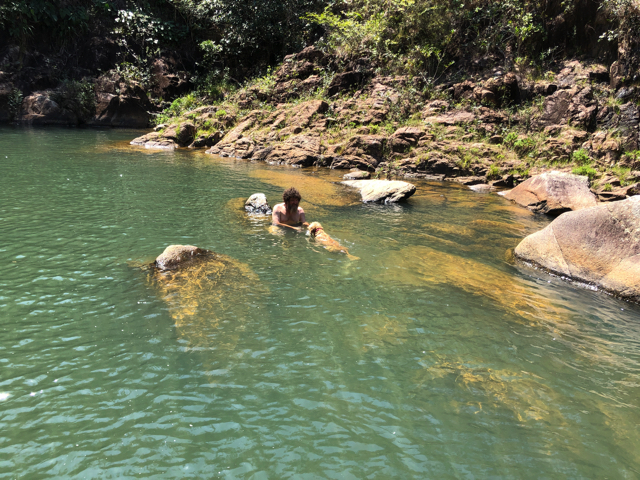